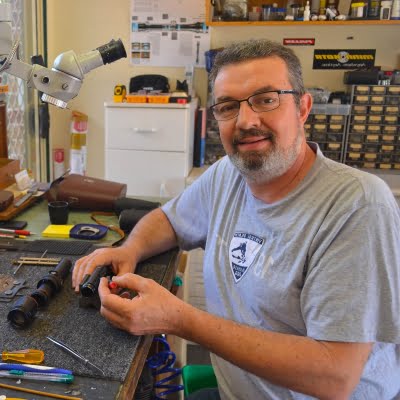 I have been involved in the optical Instrumentation business in various forms for over 30 years.

My humble beginnings began with a company in the UK affiliated to the British Ministry of Defence. In 1980 after completing my studies I went to seek my fortune elsewhere in the world and ended up in Johannesburg, South Africa where I became involved in medical equipment repairs and sales I progressed into the medical/optical side of the industry which I found fascinating, as I’d always had a great interest in optical devices in various forms from my early youth.

In the mid 80’s whilst still residing in South Africa I joined the well known Germany manufacturer of optical equipment, Carl Zeiss or Zeiss West Germany as it was called at the time. I continued my working relationship with Carl Zeiss for close on 20 years. I had the fortune to train not only in Oberkoken but also in the former East German (GDR) town of Jena, where Zeiss was originally founded. At the height of the cold war, Jena had close to 60000 people working for them either at the main plant in Jena or at associated sites nearby.

It was during this period that I pursed my interest with optical devises and furthered my studies not only from the manufacturing and design side but also the building and testing of a wide variety of optical devices, from rifle scopes through to the first image stabilized binoculars produced for the commercial market.

In 1998 I moved with my family to Brisbane, Australia where I continued my working relationship with Carl Zeiss Pty Ltd.

I was approached after just arriving into carrying out some repair work on an old rifle scope and a pair of binoculars that had been passed down from a WW2 soldier who had fought against the Japanese in 1941 and it was from here that “Optical Restorers” evolved. In my spare time I started to repair and overhaul a wide variety of different optical devices often having to do a great deal of research into their origins and functionality. The part time business has evolved significantly over the years and I still find it fascinating in what people ask me to have a look at.

A few years ago I was asked to restore a Newtonian telescope built in 1868 and donated to the first Governor General of Australia – Lord Louis Hopetoun. This is now on display at the Governor General’s residence in Brisbane. I’ve also rebuilt a number of WW1 and WW2 sniper scopes not only those that were manufacture during the war effort by countries of the Commonwealth but also America, Russia, Germany and Japan. I have also had the opportunity to restore old U-boat binoculars, old artillery gun sights, solid brass compound microscopes, old optometry testing equipment for museums and a number of medical microscopes.

I will gladly have a look at most optical devices to determine if they can either be restored to a full working condition or at least be used as a working museum piece.